I started a new project and the idea is to hack the MPK play with a MIDI over Bluetooth(BLE) add-on.
https://github.com/brorgustav/AKAI_MPK-PLAY_BLE_MODIFICATION

The MPK PLAY can run on batteries which makes it a nice candidate for adding BLE to since it would be completely wireless (if i steal the voltage from the battery to my microcontroller). 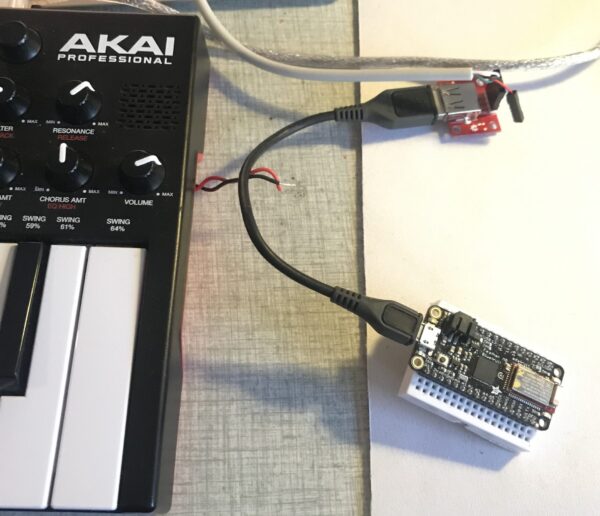 I’m also working on a version which would run on it’s own battery supply (LI-PO) with a charging feature, so it would also charge when you plug it into USB-outlet. The LI-PO version/solution would work on most MIDI keyboards without their own battery powerage (like the regular MPK keyboard). Usually most modern keyboards use the USB-cable for power.

The prototype right now acts as a USB-host (something like what your computer would do if you plug the keyboard to it). But instead of sending the USB MIDI data to a DAW/software the Microcontroller/Arduino sends the data over bluetooth to make it wireless.

The project is based on Adafruits Feather M0 bluefruit board, which is kind of like a standard Arduino but just way faster and can unlike the Arduino UNO also act as a USB-host/device. I might end up using a bluefruit SPI friend (standalone BLE-board without a microcontroller) instead together with a trinket M0 (microcontroller). It all depends on how much space is available inside the MPK-play once i try to fit it in there.

So far the code seems to work and can be found on my github.
Still in prototyping level so everything might not be very clear inside the code. Feel free to ask questions if you have any.

This site uses Akismet to reduce spam. Learn how your comment data is processed.